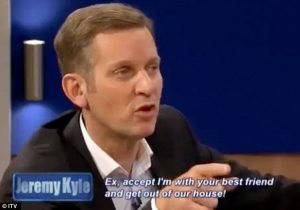 Whilst humiliation TV has become a popular genre these days, when it distorts people’s perception of the UK, it becomes a problem. Jeremy Kyle is a pathetic man, who seeks pleasure from picking on kids, to boost his own ego.

Swaggering about, he’ll shout, “Why don’t you listen to your parents ?” when that’s the last people the current teenagers’ should be listening to.

However, this gives a distorted view of Britain. It is true, over half of all conceptions are outside of a marriage or civil partnership. However…

the number of teenage girls falling pregnant in England and Wales, has reached its lowest level since 1969* !

Look at the Facts

At the same time, the overall pregnancy rate has increased.

Women in their 20s, 30s and 40+ are likely to be better off financially. This is where conception rates continue to rise. The sharpest rise is amongst women aged 40+, up 5.2 per cent to nearly 30,000.

So back off knocking the younger generation Kyle !